My mother was my friend. As the first born of a young widow, I was also her partner in taking care of our family before my siblings could contribute to our common livelihood. Our mother used to joke that I was not a son, but a husband.

We were four siblings. Three of us survive. Our sister Edith Abatesi was killed by a drunken driver Nairobi in 1984.

Our thoughts and prayers are with Doreen Kaitesi, our other sister, who is unable to be with us today due to circumstances beyond her control.

We all adored mother. We believed she was exceptional. Perhaps, many children do likewise. But who was she?

To know who a person really is, you have to explore their background. Our mother was, needless to say, a product of her times. 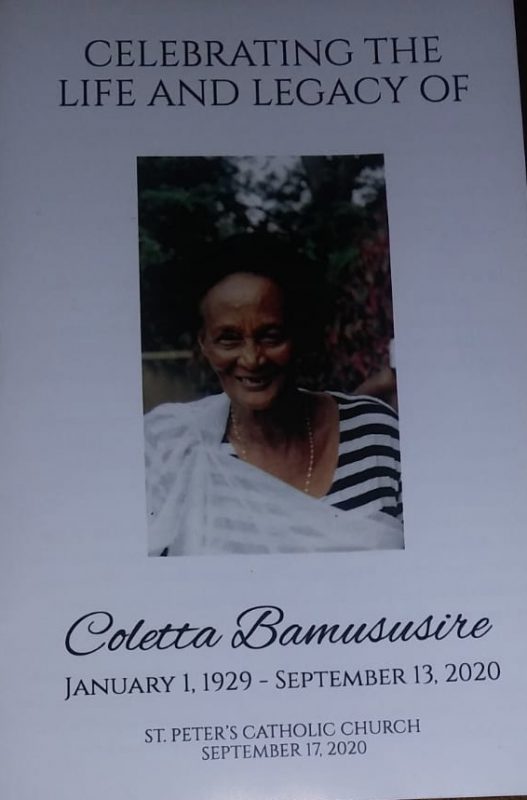 Her life, and ours in turn, were indelibly shaped by a series of events of far-reaching implications that Rwanda has experienced since the final years of the nineteenth century: the events Rwandans refer to as Rucunshu; the advent of colonialism; the 1959 Revolution and the war and genocide of the 1990s.

In 1896, a violent change of government occurred in Rwanda. Our grandfather’s immediate and extended family were on the losing side of that conflict.

Many of our mother’s ancestors perished in that violence. Our grandfather  was one of the few survivors of those events.

He fled Rwanda and lived in Uganda and Tanzania  for more than 25 years.

He only returned to Rwanda the early 1920s, after King Musinga assured him that he could safely return to Rwanda . My mother and her siblings were born to our grandfather after his return from exile.

Many of you will  probably have heard that the Rwandan nation comprises three groups (the Hutu, the Tutsi  and the Twa) and that the  Tutsi dominated pre-independence Rwanda socially, economically and politically.

That is a largely an accurate narrative, but one lacking in nuance. My mother’s family was far from being a beneficiary of political privilege or patronage.

They uneasily co-existed with a deeply entrenched and hostile political establishment that had decimated the family’s ranks only a generation earlier. Our mother’s family survived on its ingenuity and hard work.

Our grandfather started his new life Rwanda as a businessman, a strange occupation for a Tutsi man of his background. Our mother worked very hard most ofher life.

She always found a way to defy the odds. I believe that she derived these attributes from her  background of growing up in a family that was well aware that the cards were stacked against them.

My mother also grew as young woman up in a deeply patriarchal, colonized society. Women had limited rights and few opportunities. The trajectory of the life of any girl, regardless of social status, revolved around marriage. Women were meant to be taken care of by fathers, husbands and brothers.

The Colonial government and the Catholic Church set up schools. My mother passionately wanted to have access to the education that these schools offered.

However, only sons of chiefs had access to these schools. She was appalled by the fact that she could not have the same opportunities of access to education as her brothers.

Our mother’s enduring regret of opportunity missed was the genesis of her later efforts to see to it that her children had a good education at all costs.

Our mother valued education immensely. She taught herself how to read and write, and vowed that she would do everything possible to ensure that her children (including girls) had all the education the world could offer.

Growing up, we had an explicit deal with our mother: She would do all in her power to see that we had access to education.

We, in turn, would do our best to have good results in our schoolwork. She fulfilled her part of the bargain. I mention Mama’s passion for our education because it has obviously been central to shaping our individual lives as well as our respective roles in Rwanda’s history over the past three decades.

Between 1959 – 1961, Rwanda experienced yet another violent change of government, popularly referred to in Rwanda as the 1959 Revolution.

The 1959 Revolution not only over-threw the monarchy and Tutsi aristocracy; it upended Rwanda’s social order and norms. In the twinkling of an eye, the privilege upper class Tutsi had long enjoyed and taken for granted evaporated into thin air.

Some instantly became second class citizens in the land of their birth; others became destitute refugees. Our father was killed in the course of that revolutionary violence. Our family were part of  the hordes of Rwandan roaming the narrow roads and forests of East and Central Africa seeking refuge in the early 1960s.

Our mother had to learn, adapt and re-invent herself for our family to survive, and she did. After initial difficulty, she ably managed the challenging transition from life as a woman who would normally have expected to be taken care of by men of means all her life, to life as a single mother,  a refugee head of a household without any marketable professional skills.

She did alone all the things that husband and wife did together to  sustain their families, including: attending to  our every needs; building and maintaining homes; doing farm work to produce food for the family; working to raise money for tuition for food and household expenses. We never lacked anything that our peers who had fathers had.

Our mother was an intensely patriotic woman.  She   never set foot in a classroom, but she was very intelligent, always eager to learn new things, very informed on contemporary social and political issues and very articulate in communicating her views.

My siblings and I were part of the armed struggle to remove the Habyarimana regime from power. We left to join that struggle, and she had to start fending for herself again at that old age.

Like other parents of children who were part of that struggle, she had no assurance that any of us would ever return from war alive.  She fully supported the removal of a government

that had condemned us to perpetual exile from power. She was willing to lose all her children for the sake of that struggle. Even before the war was over, she was one of the very first people to return to Rwanda.

A few days ago, Theogene published an interview of my mother that was recorded  about 16 years ago. As that interview demonstrates, she had firm views on what our country needed to have and sustain peace, and to realize true reconciliation of our divided nation.

Above all was woman of faith. Her faith was an integral part of her life. It sustained when she faced challenges, as she did during childhood. It inspired during good and bad times.

It sustained her when she faced challenges, as she did during childhood. It inspired her during good and bad times.  She loved people. She was generous and selfless. She was a gentle and humble spirit.

She rarely caused offence to anyone, but when she did, she was not afraid to ask for forgiveness. We grew knowing that our mother could and often did apologize even to us when she did something that was unfair. She did not mince words. She always called a spade a spade.

Needless to say, our mother was the beneficiary of many acts of kindness and love throughout her life.

Due to time constraints, I can only mention a few of the people who meant so much to her in life. An auntie of hers whose name we can faintly remember as Veronica (and daughter Kaligirwa) was a critical help to my mother when we were too young to be on our on. Our mother’s difficult journeys in east and central Africa followed Veronica’s. We are eternally grateful to Veronica.

Gahondogo was a relative of our mother who’s gifts just came at the right time, contributing to our family’s survival. We express our deepest gratitude to his family.

Alphonse and Petronille Kabutura have stood by Mama’s side, loved and helped her in countless ways since our childhood.  They took care of our mother when we were participating the RPF struggle. We truly can never repay that family for all they have done for us.

We also owe a very heavy debt of gratitude to the Rwigamba family for assistance they extended to our mother during our childhood,  and for their love since.

Specioza Kayihura loved and befriended Mama, in spite of their vast age difference. The love our mother had for Specioza was truly unfathomable. Our profound gratitude for her compassion and love to our mother.

Jeanne Nzabamwwita (Mama Inyumba) and mother were very close friends and shared deep affection for each other.

Father Inchimatata has loved and helped our mother in many ways, including helping her materially, physically and spiritually. He was as much her son as either of us, and our mother loved him dearly.

We thank my mother-in-law, Anne’s mother,  for  taking care of our mother in Uganda for two years while her resettlement in the US was being processed.

We also thank everyone in the US government who worked to make our  re-union with our mother possible, which made eight more years of her life a celebration of her life.

The US Government also granted citizenship to her. We were honored that our mother should crown her life with a belonging that will now forever be remembered as her final resting home.

In her own words, our mother was heavily indebted to Uganda’s hopitality that enabled us to survive and flourish without discrimination. As a family we add our voice to hers in thanking the Uganda Government and people for their generosity and support.

Above all, our mother was specifically grateful to the Catholic Church, and the Christian Church in general, for having extended spiritual care and support to our education. Again, we owe a heavy debt of gratitude to the Church.

These and many other friends of our mother whom I do not have  the opportunity to specifically mention, we convey our  gratitude.

Doreen, Theogene and I above all commend my wife Anne for all  that she has done for Mama over the past thirty years. In Anne, she found another daughter. Even as dementia took its toll on her body, Anne was the only person she never failed to recognize.

Taking care of  an elderly parent and ensuring her health, comfort and happiness requires a lot from family.

Our children and the Karegeya family (especially Leah)  stepped up to the to the challenge. Our mother  was treated with love  and affection every waking hour. She knew she was in loving hands and ceaselessly communicated her appreciation for this.

We have been blessed beyond measure in our lives. All we are and have achieved in life we owe in large measure to her faith, love and hard work.

May God bless you.