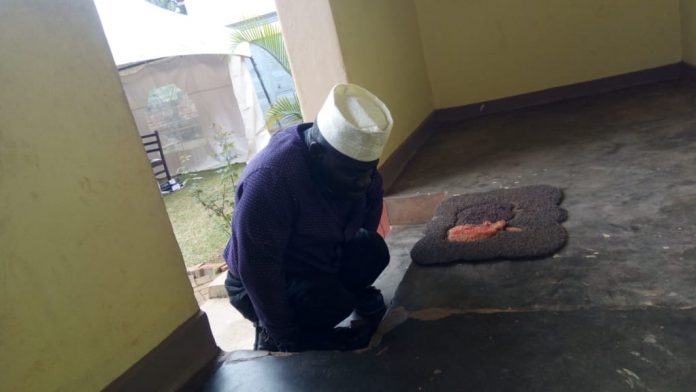 Persons with disabilities have found it hard while accessing the premises of Rubaga division Electoral commission offices during nomination exercise.

These are people with physical impairments who use wheelchairs, under-arm crutches and those with visual impairments. Over thirty persons with disabilities showed up for nominations.

Lawrence Mwenda the chairperson of Ndeeba disability council has a physical disability and uses a wheelchair, he explains that the whole system at the division excludes persons with disabilities of all forms of conditions.

“I have spent over ten minutes waiting for whoever could help me to access the offices. This is a public office that should be accessed by all people regardless of their conditions.” Mwenda notes.

Mwenda was carried by two gentlemen with his wheelchair to move steps which he could not do without any help to enter the office where the persons with disabilities are being nominated.

Mwenda who is also a secretary of Rubaga division disability council appeals to the electoral commission to intervene and always prepare for them the environment where they can access without challenges.

Moreen Karungi who uses under arm crutches narrates that what they have found at the divisions shows that there is still a big gap in addressing challenges that PWDs experience in accessing public facilities.

Karungi who is the aspiring Local council 3 councilor for Persons with disabilities in Rubaga notes that they have been left behind in many sectors. Adding that they are rarely thought about.

He says that the police helped them by allowing them to enter with the car, however, the car will not enter the office.

“We know that they are still renting someone’s house which means they might not change much about the environment but they should try, at least putting for us the desk outside. Now how will some of us access the offices?” he asks.

However, the returning officer of Rubaga Division Ezra Ongaria explains that inaccessibility of persons with disabilities is still a challenge. Adding that when he saw that, he employed some boys and girls who help in lifting whoever has a challenge.

On the issue of considering other impaired persons like those with visual impairment, he says they have no sign language interpreter.

Electoral commission kicked off nominations of Local government councils and division chairpersons/mayors today and they are taking place at District/Division levels.