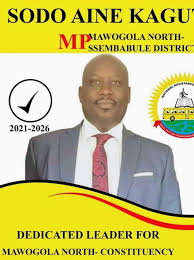 Sodo beat Kutesa in NRM party primaries but Kutesa contested the defeated alleging that the elections were marred by violence and vote rigging. She thereafter, petitioned the party for redress.

Also disqualified are Col. Fred Mwesigye of Nyabushozi and Stephen Kangwagye for Bukanga.

However, a source that talked to Sodo told Eagle Online that Sodo wasn’t aware about  his disqualification as he was on the way to Sembabule for nomination.