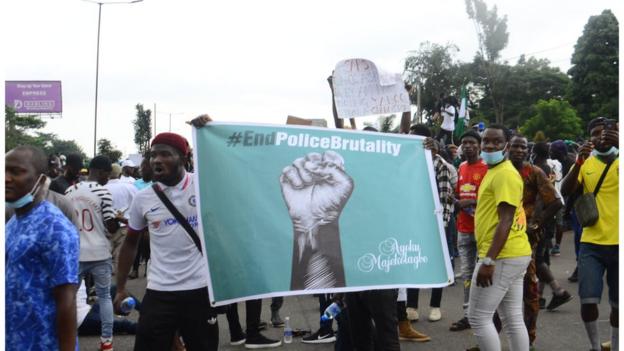 Sports personalities around the world have shown their support for the #EndSARS movement, which has enveloped Nigeria, as young people across Africa’s most populous nation protest for an end to police brutality.

After days of protests, the unit was officially disbanded, following pressure from protesters, with support from the sports community.

While protesters have said this is not enough, the Nigerian military has warned “subversive elements and trouble makers” have taken advantage of the protests.

Why did athletes get involved?

The nationwide protests began in early October, with many young Nigerian’s marching to express their dissatisfaction at the tactics of Sars.

It is an issue that many Nigerian sports personalities said they were personally affected by – not least in the light of the death of Nigerian footballer Tiamiyu Kazeem in February 2020. Kazeem was killed by a hit-and-run driver after being stopped by Sars officers.

Super Eagles midfielder John Ogu is one of those who has marched against Sars. He told BBC Sport Africa he was inspired both by the memory of Kazeem and his own personal experience, expressing solidarity with “the youth who have no name”.

“I love my country but we are not happy with the government,” he said.

”Everyone has a story about this Sars. You’ll be driving your car and Sars will pull up in front of your car. At first, you’ll think that they’re armed robbers because of the way they are dressed, the manner of how they talk.”

During the recent international break, players from Nigeria’s men and women’s football lent their voices to the cause on and off the pitch.

One of the major accusations levelled at the police unit was its profiling of young men and women due to their lifestyle.

Peter Moreno is Nigeria’s decathlon record holder and also a soldier in the British Army. He said he was arrested and tortured by Sars.

He added that his belief was it happened because agents judge young people by their looks.

“These officers have guns and cutlasses,” he said.

“I’m covered with tattoos front and back, I have dreadlocks so [they think] it means I’m a criminal. I’m not.”

As word of the protests spread, Nigerian footballers were supported by their colleagues across the world:

And support moved from football to other sports…

What does the government say?

Nigeria’s President Muhammadu Buhari has called for “patience and calm” as he announced the disbandment of Sars which as been replaced with a new division named Swat (Special Weapons and Tactics). With protests continuing though, many protesters have rejected the new division.

For John Ogu, the fight to rid the country of police brutality will be a long but he believes the government need to give police officers more resources.

“To be honest I don’t think the brutality will end – and that’s what we’re fighting for,” he said.

“We’re also fighting the government to increase police officers’ salary because they don’t get paid well.

“Our voices are being heard but we want action. Being a part [of the march] gives me joy because I have a daughter who will grow up tomorrow and I want her to have a better life.”