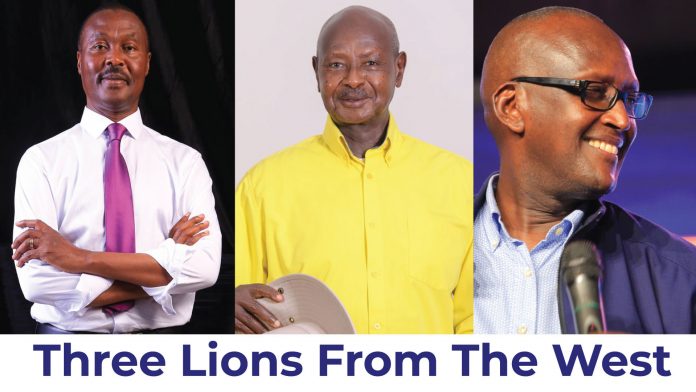 Will Generals Muntu and Tumukunde give Museveni a run for his money?

The 2021 General Elections will see General Mugisha Muntu and Lt.Gen Henry Tumukunde, two men who were very central in the 1981-86 Bush War, challenging President Museveni for the country’s Number One job.

Gen Muntu, a former powerful Army Commander, and Lt Gen Tumukunde, an ex-Security Minister who also held different influential positions, both argue that President Museveni has since betrayed the ideals that inspired the Bush War and it’s now time up for him.

Gen Muntu will contest on the platform of the Alliance for National Transformation (ANT) while Lt Gen Tumukunde will contest under the auspices of a pressure group called Reformed Uganda aka “Kisoboka”.

President Museveni has never faced off with two generals in one election and it is no wonder that there is palpable unease within the ruling National Resistance Movement (NRM) and security circles over how the system should respond to the two-pronged challenge.

As a former Secretary for Mobilisation and President of the Forum for Democratic Change (FDC), Uganda’s leading opposition party, Gen Muntu boasts of support from structures that he helped nurture while still at the helm of the powerful party.

The General is also preferred by NRM moderates who posit that a post-Museveni transition requires an astute, and temperate political player who will not antagonise radically entrenched forces in the regime establishment.

The uncertainty about a post-Museveni Uganda plays into General Muntu’s hands.

Having served as Army Commander for a record 9 years, between 1989-1998,(only Gen Aronda Nyakairima(RIP) served longer),Gen Muntu maintains the respect of influential Generals, and that has been a particular cause of concern for the regime and security agencies.

Gen Muntu is also a darling of the influential donor community, which has long been impressed by his structured, grass-roots based, and all inclusive politics. The donor community views Gen Muntu as the perfect fit to healing a country fractured by years of lack of a peaceful transfer of power and burdened by the Museveni dictatorship.

And with Gen Muntu already giving the regime sleepless nights, the entry of Lt. Gen Tumukunde into the fray was the traditional adding of fuel to the fire.

Gen. Tumukunde needs little introduction. Those familiar with the machinations that went into over-drive in the 2016 elections say it would have been difficult for President Museveni to retain the presidency had it not been for the underground work of Gen Tumukunde.

Gen Tumukunde worked single-handedly to dismantle the structures of John Patrick Amama Mbabazi and secure the victory for President Museveni. Gen Tumukunde was the real cog behind the re-election of Museveni in 2016 and when he announced that he was now launching his own presidential bid, he sent shivers down the spine of NRM faithful.

He is also credited for his mobilization skills that without him and a few of his colleagues like the late Brig. Nobel Mayombo and to be precise like Speaker Rebecca Kadaga said, Museveni should have been sent home in 2001 if it was for Tumukunde and others who delivered a win for Yoweri Tibuhaburwa Museveni.

Security agencies have also been in over-drive mode in a bid to try and establish the veracity of claims that  Gen Tumukunde has the backing of wealthy donors both within and outside Uganda. However, Tumukunde has previously told Eagle Online with or without financial support from within and without, the struggle to remove Mr. Museveni starts with the determination of the power of Uganda who are pro-change.

Fears that Lt.Gen Tumukunde has the backing of wealthy individuals were behind the raid by security operatives on his offices in Kololo.

It is also proper to understand Gen. Tumukunde’s opposition to Museveni’s continued stay in power started in 2005 when still serving as an army representative in parliament opposed the amendment of the constitution to give himself limitless terms in office. it is from here that he was arraigned in a military court martial and for nine years, he was kept in a cage of the officers’ mesh.

Having served as an MP, Army MP, intelligence chief, Army Division commander, Lt Gen Tumukunde enjoys reasonable support from within the security agencies, another sub-plot that has created apprehension within the regime.

When nominations are concluded tomorrow and Gen Muntu and Gen Tumukunde are both on the ballot, President Museveni will have to contend with two challengers uniquely different from those he has previously handled.

However, with both coming from Museveni’s traditional home area of Ankole which has previously voted massively for Museveni in the previous elections, it is hard this time to ignore the two generals due to the fact that they are also homeboys like Museveni and secondly they both know tricks used to by Museveni to win the hearts of the electorates in the area.

Generals Tumukunde and Muntu like earlier indicated, both have been key to Museveni’s earlier entrenchment into power and therefore, they could be in the know on how to undo what they did for Museveni.

Tumukunde’s Rukungiri and other parts of Kigezi are already under the armpits of the opposition and as same can be said of Muntu’s Ntungamo despite the presence of First Lady, the area in 2016 voted for Gerald Karuhanga who is an opposition MP. So will the two army generals impact on Museveni’s 2021 election outcome?