Anthony Joshua: Why Nigerians see him as one of their own 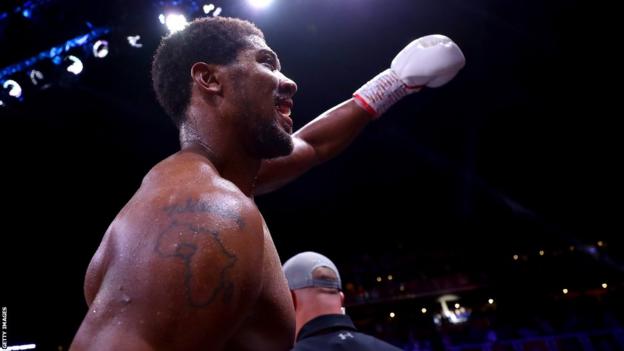 On Saturday evening in London, Anthony Joshua will step in to a boxing ring for the first time in a year as he faces Bulgaria’s Kubrat Pulev.

With the global Covid-19 pandemic taking its toll on sport just 1,000 lucky fans will be in the SSE Arena to see Joshua defend his three heavyweight titles.

While the arena will be virtually empty, millions of fans around the world will be following the fight on radio or TV and it is fair to say he will be getting a lot of virtual support from Nigeria.

The 31-year-old may have won his Olympic gold for Great Britain but he is also an idol in Nigeria, and nowhere more so than he quiet south-western town of Sagamu, where his family originates from.

The Joshuas are well-known in Sagamu and trace their ancestry back through several generations.

His great-grandfather is Daniel Adebambo Joshua, a wealthy landowner and merchant who is believed to have taken the last name after his conversion to Christianity.

Daniel sent one of his sons Isaac Olaseni Joshua to Britain to study and he eventually married an Irish woman who returned with him to Nigeria where they raised seven children.

One of those children, Robert ended up marrying Yeta Odusanya, also from Sagamu, and is father to Anthony and his sister Janet.

His middle name is Olaseni in honour of his grandfather. His recent sporting exploits have ensured that the family name is quite popular not only in the town but across the nation and beyond.

Showing off his heritage

Joshua is very proud of his Nigerian heritage, with the most obvious sign being his tattoo of Africa, with Nigeria outlined, his right shoulder.

His love for Nigerian music is evident on his social media handles as sings along to tunes from the West African nation.

Another of his favourite things from Nigeria is the cuisine and again he often shows of his cooking skills of the nation’s culinary staples.

Joshua’s love for Nigeria has also seen him send food and care packages to families affected by the coronavirus pandemic.

Even the Nigerian president Muhammadu Buhari is a fan, the two met in London in January with Joshua presented him his belts.

With the physique of a mahogany Hercules, a well-mannered, soft-spoken persona, a 5,000-watt smile, a booming infectious laugh are all part of Joshua’s allure.

Then in the ring he has a winning fight record filled with notable names and spectacular knockouts all of which means Joshua is regarded by many as the biggest sporting star to come out of the country after NBA legend Hakeem Olajuwon.

All these have endeared him greatly to Nigerian fans who have taken to him like no other heavyweight champion of Nigerian heritage before him.

Henry Akinwande and Samuel Peter both held the WBO and WBC titles in the past but neither of them can hold a candle to Joshua’s stature and popularity in Nigeria.

As a matter of fact, Joshua has his own fan club in Sagamu which was founded in 2017 ahead of his career-defining fight against Wladimir Klitschko.

“In his last fight against Andy Ruiz, we had a public screening of the fight with a big screen and a projector.

“As many as 10,000 fans turned up to watch. We do a lot of publicity. Some travelled all the way from neighbouring towns.

“Even now we have been receiving countless calls from people asking if we are going to screen this fight against Pulev.”

TV, radio, web and print all of Nigeria’s media houses devote plenty of time and column spaces to his fights and the build up to them.

Many of them descending on his hometown for the huge public viewing to gauge the pulse of avid fans. For those who cannot see his fights on cable TV, fans troop to social media to keenly follow and engage in feisty debates.

Despite Joshua not meeting up with his fan club on a trip to Sagamu in February there are no bad feelings that he decided to meet the traditional ruler of the town and his chiefs briefly before disappearing as silently as he had come.

“It doesn’t matter. He is still our son and our representative,” says Okunoren.

“His father, grandfather and great grandfather are from here. I know he also has roots in Watford but there is no way we will not support him. We still hope that one day he will identify with us and support us.

“We will keep praying for his success but we need his presence here. We would like him to build a legacy here by building something here.

“It could be a gym, a recreation centre or even a hospital. Something people will see and remember him by.”

Joshua’s legacy is already rubbing off on quite a lot of youths especially in the south-west of Nigeria, especially in Lagos the commercial capital.

Many of them have watched his rise to prominence and identify with his story as a troubled youth who found his path to redemption and riches through pugilism.

It is a well-worn theme in the country’s prolific Nollywood movie industry as people dream of one day following his footsteps to the world stage and the big paydays.

This has seen an explosion of an amateur boxing circuit with public schools being used for training after hours and on weekends as well as any handy open space as well.

The equipment is substandard and training is not structured. But the zeal is overwhelming.

Lekan ‘The Engine’ Muibi is a prime example of this new wave of amateur hopefuls.

The 21-year-old is an automobile mechanic, hence the nickname gained due to his stamina, work rate, heavy-handed punching and piston-like jabs.

Living in Mowe, just 35 kilometres from Sagamu, Muibi, a light heavyweight describes Anthony Joshua as one of his idols.

“It was Mike Tyson that inspired me to take up boxing. But it was Joshua who really fired up my imagination that I can make it to the top because he is Nigerian like me,” he told BBC Sport Africa.

A visit to his Facebook page shows the extent of his imagination as well as his determination. Pictures and videos of Anthony Joshua as well as other global superstars are scattered everywhere.

There are also countless videos of Muibi himself shadow boxing, sparring and training with the most rudimentary of equipment in spartan surroundings.

He also spends hour after hour watching YouTube videos of Joshua in order to improve his own skills.

“I learn a lot from him. He is very powerful but conserves his power,” he explains.

“I study how he is accurate with his punches and how he studies his opponent and thinks before throwing. He is very calculative.

“My dream is to spar with him someday. There is so much I can learn from him.

“His footwork is underrated, and I like his new style, the one he employed in the second fight against Ruiz. It was very interesting and effective.”

While Muibi is dreaming of getting in a ring with Joshua the vast majority of his Nigerian fans would be satisfied if he would have one of his fights in Nigeria in the future.