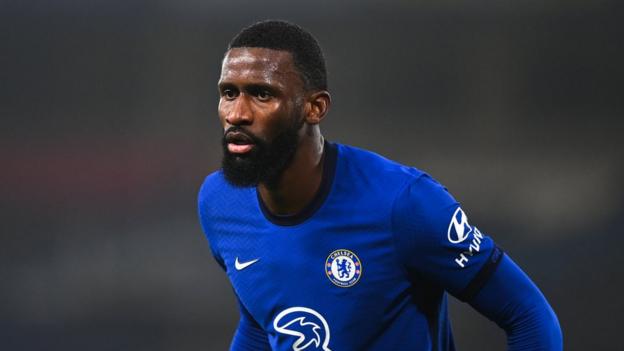 Chelsea defender Antonio Rudiger has said his shock at the impact of Covid-19 has prompted him to help people in both Sierra Leone and Germany.

The Germany international, whose parents are from Sierra Leone, added that by adhering to the current protocols he has so far avoided the disease.

“It was shocking. At some point especially at the beginning like for a couple of months the world was standing still and it makes you think a lot,” the 27-year-old told BBC Sport Africa.

He has bought 60,000 facemasks for market traders in Sierra Leone and also donated money to the country’s Free Quality Education initiative while in Germany he provided foodstuffs to hospital workers at a hospital in Berlin.

“I have been poor before so I just thought what can I do to help in this type of situation,” the Chelsea star expalained.

“I asked the hospital where I was born what I can do to help then I said for the next three months I am going to pay for food for hospital workers there.

“You saw when I also met the Sierra Leone President Julius Maada Bio in London. I donated to education in Sierra Leone. I strongly believe in God and that’s why it’s important for me to share. This is how I grew up.”

He added that he would like to contribute more by going beyond mere donations to the west African country.

“I want to be the guy who is also developing our country just like what Nana Kwame Bediako is doing in Ghana. To me he is like a role model and that’s what I want to be in my country,” he added referring to a successful property developer in Ghana.

Rudiger says his upbringing in a predominantly migrant suburb in Berlin helped him appreciate his Sierra Leone roots and that he would like to try his hand at business there.

“If I look back at it, it was the biggest blessing to grow up there with different groups of people. There were Blacks, Arabs, Polish, there were a lot of different people,” he explained.

“I grew up hearing people speak different languages, practising different cultures so for me personally I think that was a blessing because this is who I am.

“My family flew from civil war and we had a great life in Germany. You always have to be thankful but I also have different roots this is also what I have to respect.

“I play for the Germany national team because Germany gave something to my family that’s why I feel German but at the end of the day I see myself also as a Sierra Leonean. That’s who I am and I am very proud.”

So far Rudiger himself has avoided contracting the disease and says he is just grateful he can still play football.

“We can be happy that we are able to do our job as normal. Fans are missing. In that way it has affected me. I miss fans because fans bring emotions but at the end of the day we are still doing our job,” he said.

“For now, the only thing I can do is to take care of myself and my family. Keeping the rules and not misbehaving that’s all I can do.

“So far I haven’t had it (Covid-19) so thank God for that and none of my family members have had it. It’s tough for everyone but I think if you follow the rules and do what they say you should do, I think you can save lives.”