Mourners, political and cultural institutions praised the late for his distinguished roles he played during his reign.

“He has loved his Kingdom more than anything else and using his position, he managed to unite other cultural leaders through organizing conventions,” Moses Mugurusi, the institution Prime Minister said.

Bishop Wayabire, who was the head of the Revival and Salvation Apostolic Ministries in East and Central Africa was crowned as the maiden Ikumbania of Bagwere in 2014. 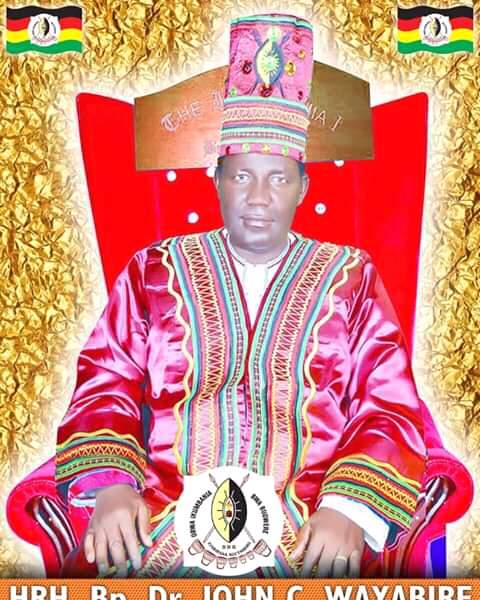 This followed the polls, where he was declared an unopposed as the cultural leader of the Bugwere Cultural Institution by Cornelius Bole, the chairperson of the Electoral Committee in July 2015 in the polls that were held at Budaka District headquarters, and witnessed by clan leaders, area members of parliament, local leaders, elders, security personnel, opinion leaders, and state house officials.

80 of 86 clan leaders locally known as the “Itabangis”, who form the Electoral College participated in the elections.

His election however sparked protests from the rival Ikumbania, Kintu Samuku Mubala who dragged him to court challenging his election, which reinstated him in 2015 as the rightful leader of Bagwere.

Mourners at the funeral noted that Wayabire had fulfilled most of what he promised during his coronation.

On Coronation, he pledged to prioritize land protection, education, youth morals and encourage his people to work hard towards eradicating poverty from their households.

“We own a radio station that trains our children at a free cost, he opened up Vocational schools to train our children, most of our youth have boda-boda (motorcycles) bought for them by the Ikumbania Foundation, he indeed performed,” one mourner and beneficiary said.

Wayabire was born on July 25, 1957 in Kenkebu Sub-County, the present-day Kibuku district to the late Lawrence Mwoya, of the Abakatikoko Abanamwera Katikati clan and Christine Naguti Mwoya. He was the first born of his parents.

He is the former head of the Revival and Salvation Apostolic Ministries in East and Central Africa and Uganda’s first religious cultural leader.

His church currently has over 40 branches in Africa and USA

In 1989, he moved to Busia District, where he joined the born-again church and later started a born-again church under an orange tree in his father’s compound.
He later established many more churches in other regions, started social support programs where he cared for orphans and widows.
He was taken to the United States of America where he lived for several years and later ordained Bishop before returning to Uganda.
He was married to Sarah Wayabire and blessed with 12 children and six grand-children

In 2013 was elected by Bugwere Clan Heads as the first Ikumbania of Bugwere, he was later in July 2014 gazzetted by Central Government.

He established five schools for vulnerable children both primary, secondary and vocational. In June 2019, he was entrusted by the Uganda counterparts as interim Chairman to revive the Uganda kings and Cultural Leaders Forum (UKCLF)

In December 2020 he was officially elected the National Chairman of Uganda Kings and Cultural Leaders Forum (UKCLF).