Benjamin Acheampong: ‘They can’t treat us like animals,’ says player ‘duped’ out of $1m 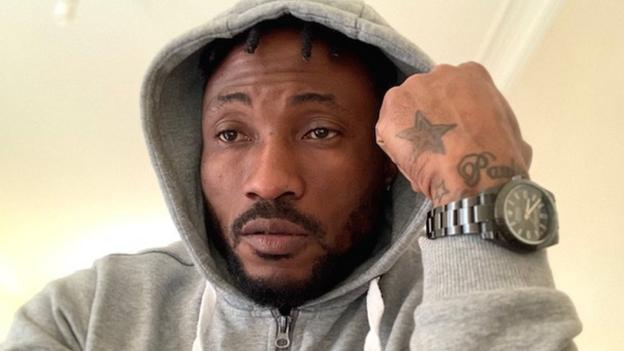 Benjamin Acheampong says he has been duped out of $1m by a football club once, and he is determined it will not happen again – especially by the same organisation.

The Ghanaian has been deprived of more than $1m (£710,000) in a row with Egyptian giants Zamalek dating back to 2018, and despite the Court of Arbitration for Sport (Cas) ordering the five-time African champions to pay him a similar sum two months ago, he says he is yet to receive a cent.

“This is not right – this is what I do to feed my family,” the 30-year-old told BBC Sport Africa. “They can’t treat people like animals. We are humans and we came here to work.”

As one of Africa’s biggest clubs allegedly ‘exploited’ the contract of a player it no longer wanted, it has been accused – by Cas itself – of “immoral”, “intimidating” and “merciless” behaviour.

Acheampong, a forward, joined the Cairo club on a four-year deal in 2017 but terminated his contract after 11 months, saying Zamalek never paid him correctly.

He also says that when he joined fellow Egyptian side Petrojet on a five-month loan in 2018, he was duped into signing a document which stated he would not just forego his Zamalek salary while at Petrojet – but for all of his contract.

With the stroke of a pen, he says he unwittingly gave up more than $1m.

“Nobody would do that,” said Acheampong. “The only thing I (knowingly) signed was that Petrojet would pay me the half-season I was going to play.”

In December, Cas said Acheampong had “just cause”, for a variety of reasons, to have unilaterally cancelled his contract with Zamalek, who must now pay him $1.1m.

Yet just when it seemed he would finally receive his dues, there was a twist.

In a letter to Fifa, Zamalek – Africa’s Champions League runners-up in 2016 and 2020 – announced a “settlement with the player’s agent” in which the Ghanaian had supposedly agreed to accept just $250,000.

Yet the agent – former Egypt captain Nader El Sayed – no longer represents Acheampong, the player says. He claims the Egyptian falsified papers purporting to enable him to deal with his former club on Acheampong’s behalf.

El Sayed, whose paperwork states he will receive 20%, has told the BBC the documents are both “authorised” and “official”.

“The mere contention that Mr Acheampong would – two weeks after the notification of the Cas decision – suddenly authorise a third party to accept a settlement for less than 25% of the amount due is preposterous,” said Roy Vermeer, the legal director at global players’ union Fifpro.

Acheampong has seen none of the $1.1m Zamalek were told to pay him, nor even the cheque for $250,000 – which he does not want – made out in his name and which, he claims, was handed to El Sayed.

On Thursday, Fifa, which has opened disciplinary proceedings against Zamalek, could hand the club a transfer ban and, possibly, either a points deduction or relegation too.

“They have to be punished,” said Acheampong.

Founded in 1911, Zamalek are one of most famous clubs in both Africa – where Egypt is the continent’s most successful nation given its dominance of both club and international football – and the Middle East.

Both at home and abroad, only great Cairo rivals Al Ahly can beat Zamalek’s record of five African crowns and 12 Egyptian titles.

“I was very, very happy to join the club,” said Acheampong, a former Ghana youth international, as he reflected on his move there in September 2017. “If you have a chance to play for Zamalek, you are a big player.”

He made his debut in December, scoring twice, before starting a run of games as their main striker. But a month later, Zamalek’s coach was replaced by one whose plans did not feature the Ghanaian.

In late January, Acheampong was loaned to Petrojet, signing the paperwork – deemed “immoral” by Cas – in which he supposedly relinquished more than $1m.

“The player would still be contractually obliged to return to the club. This … would clearly be immoral as it would oblige the player to perform work without salary.”

By the time he joined Petrojet, Acheampong should have been paid $210,000 by Zamalek – but had received just over half that – and after his loan ended, another scheduled payment, this time for $72,500, simply never came.

“They will put you into situations that will frustrate you so that you say, ‘let me cancel my contract’,” said Acheampong. “But because I know what I’m doing, I didn’t say anything.

“As a professional, you can’t go three months without getting paid – automatically, Fifa rules (state) you are free to go. So I waited for that.”

After returning from his loan, Acheampong says he was frozen out of first-team training and trained with juniors instead – a claim Zamalek disagree with, but which the Ghanaian has documentary evidence to support.

On 6 August 2018, Acheampong terminated his contract.

Later that month, he joined a club in Qatar – but only after Zamalek insisted he give up his claims against the club before it would provide him with the paperwork needed by Fifa to approve his transfer.

With many transfer windows closed and a family of four, including a two-month-old, to support, Acheampong signed yet another controversial document.

“I declare that I receive all my money and financial belonging,” read a so-called ‘settlement agreement’ he signed in September 2018.

“Without that, they would never send the documents,” he explained. “If I didn’t sign, how was I going to feed my family? It’s so shameful that you can’t provide. When I was in Zamalek, I spent all my money that I had saved – because they didn’t give me money.”

Two months ago, Cas ruled the ‘settlement agreement’ was invalid as Acheampong signed it under “straitened circumstances”.

“To get such an agreement null and void happens very rarely,” Vermeer told BBC Sport Africa. “But we thought that this is a case where we can do it and set a precedent for other clubs.”

In its findings, Cas rebuked the club’s “merciless” and “intimidating” attitude to Acheampong and the pressure put on him to sign the ‘settlement agreement’.

“The player gained nothing, because he was in principle already a free agent,” said Cas. “The club gained an enormous and disproportionate benefit by getting rid of a case of breach of contract [and] by not having to pay the player’s outstanding remuneration and compensation for breach of contract.”

Zamalek failed to attend the hearing, later telling Cas one reason it had not done so was ‘because the person managing the club’s email address had left‘.

Meanwhile, significant parts of the club’s version of events were disproved by the evidence that the meticulous Acheampong, advised by Fifpro, had accumulated along the way.

Cas found he had “no other option but to terminate” his Zamalek contract, citing – among other reasons – his lack of proper payment, his exclusion from training and from the registered squad for the 2018-19 season.

It also ruled that Zamalek should pay Acheampong $1,075,984 for both his outstanding remuneration and breach of contract.

Two months on, Acheampong does not have the money – primarily because of the supposed deal, described by Fifpro as “bogus”, between Zamalek and El Sayed.

“I haven’t met El Sayed since 2018, so where did I meet to give him that?” said Acheampong, who joined another Egyptian club, El Dakhleya, in November. “I have no idea what Nader El Sayed and Zamalek are doing.”

Acheampong has told the BBC he did not sign any of the three documents presented to Fifa as evidence by Zamalek, all of which purport to show the player having given written permission to El Sayed to represent him.

After Cas issued its ruling, El Sayed asked the Ghanaian embassy in Cairo to officially stamp a document bearing Acheampong’s name – with embassy officials, who refused the request, telling the BBC that El Sayed had told them the player himself could not attend as he had Covid-19 (which Acheampong says he did not).

“The player is my player since 2016 until now and all agreements and authorisations are official and documented,” El Sayed told BBC Sport Africa.

Zamalek, meanwhile, has not provided a statement to the BBC.

On Thursday, Fifa’s disciplinary committee will discuss the issue, with one of its rules clarifying possible sanctions for a club that persistently fails to comply with a ruling.

“A transfer ban will be pronounced until the complete amount due is paid,” reads Article 15. “A deduction of points or relegation to a lower division may also be ordered.”

Despite feeling alone in Cairo while his family live in Germany, Acheampong says his battle – which may ultimately be decided by hand-writing experts – is not just for him.

“I want to encourage other guys to fight for whatever belongs to them. This is what we do to survive.”