The outgoing Minister of Foreign Affairs, Sam Kutesa has on Tuesday officially handed over office to the new Minister, Jeje Odongo who took oath as Minister during the swearing in of new Cabinet at Kololo Independence Grounds on Monday.

Odongo who was appointed to the role by President Museveni, was serving as Minister of Internal Affairs.

While handing over Office, Kutesa applauded President Museveni for giving him the opportunity to serve as the Minister for Foreign Affairs for over 17 years.

Kutesa who is also the former President of the United Nations General Assembly, appreciated his Ministry staff for the support, and owed the Ministry’s achievements over the years to the “spirit of team work.”

Kutesa congratulated Odongo upon his appointment as the new Foreign Affairs Minister, and also commended him for the excellent working relationship the two had while he (Odongo) served as the Minister of State for Defence and later on as the Minister of Internal Affairs. 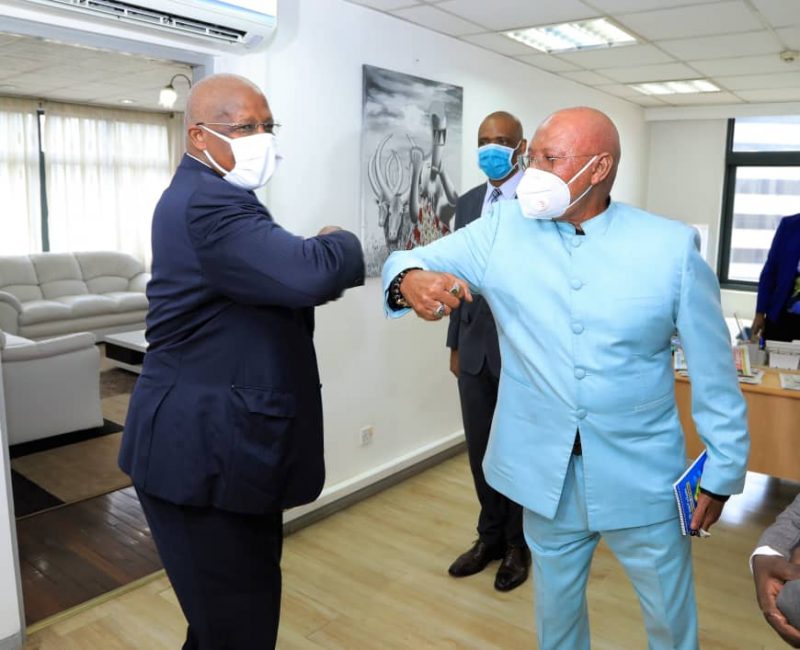 Similarly, Odongo also thanked the President for the appointment, and conveyed a message of gratitude to the outgoing Minister, for the warm reception that was accorded to him.

He committed to joining hands with the staff to advance the work of the Ministry of Foreign Affairs.

Odongo expressed his willingness to consult Kutesa as he settles into the Ministry, and assured the latter that he will work with the staff to ensure that his legacy is maintained at the Ministry.

Odongo looks forward to the “guidance and support of the Permanent Secretary, the Directors and all the Ministry staff” to ensure Uganda maintains a good relationship with other countries.

The Ministry Permanent Secretary, Amb Patrick Mugoya applauded Kutesa for his “exemplary leadership, time and wise counsel he rendered to the Ministry since 2004.”

Amb Mugoya also assured the new Minister, Odongo of the unwavering technical support of the Ministry staff as he embarks on his new appointment.